‘C’ has been out of town for the last week on business, and I thought I would take this opportunity to invite some girlfriends over to my place for a girly dinner! I love girl’s night, it’s just a chance to sit and chat, drink wine and eat some good food. I have been so lucky to have met some lovely girls here in Mexico whom I have come to consider good friends and I wanted a chance to show my appreciation for them by throwing this dinner party.

I also took this opportunity of ‘C’ not being around to make Melanzane alla parmigiana – which basically is an aubergine lasagna. You see, ‘C’ is ‘apparently’ allergic to aubergine, which is why I never cook with it when he is around. I say apparently, as I am quite convinced he isn’t but rather he just doesn’t like it, and by saying he is allergic he knows I won’t bully him into eating it :) I can be quite pig headed at times… 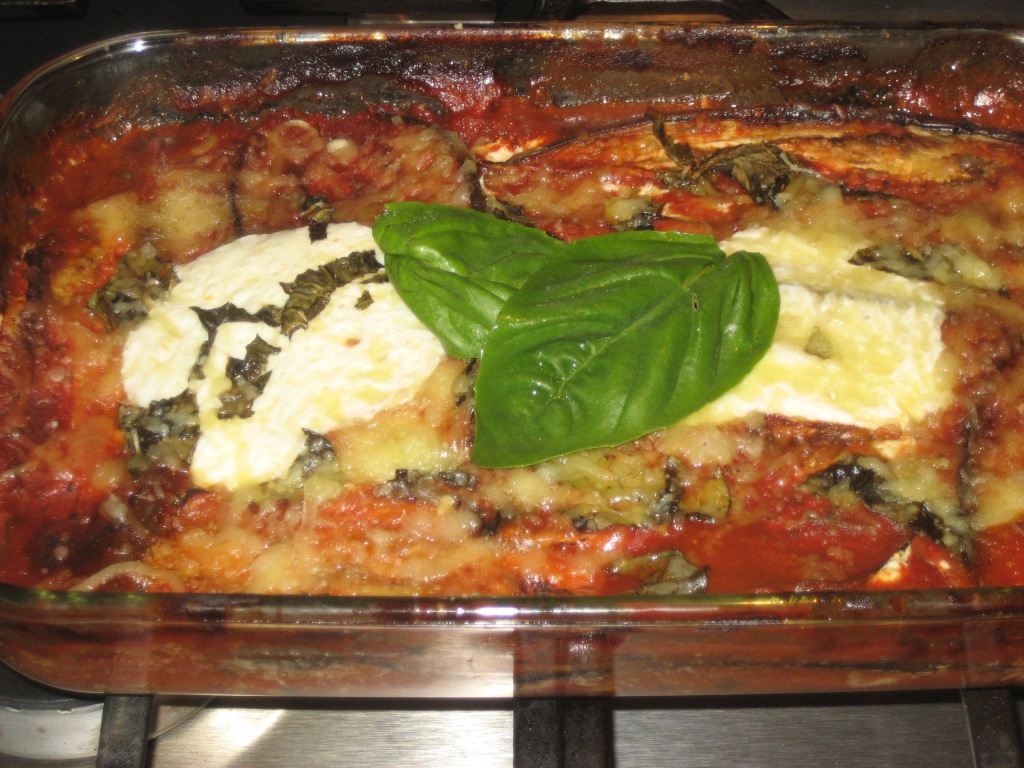 I love Melanzane as it is such a fantastic dish with such rich flavours, and although traditionally it is meant to be served as a side vegetable dish, I would not think twice about serving it as a main course with a side of salad and some crusty bread – which I did. I also chose this dish as I have a few girlfriends who are vegetarian, and instead of making something different for them – I decided to keep the whole meal vegetarian and I can tell you, everyone really enjoyed it.

This dish itself is pretty straight forward, although, I would say the most time consuming part is slicing the aubergine, letting it sit for an hour and then frying the slices until they get golden brown. As I had 10 girls come for dinner I doubled the quantity and had over 2kg of aubergines to go through…

This is another recipe that I got from my mother, who got it from a Swedish magazine and unfortunately I do not have any idea from which magazine it came from, so cannot give credit where credit is due. The original recipe calls for hard boiled eggs, but I left this out as one of my girlfriends is allergic to eggs (poor thing!). I remember the first time I saw this recipe and saw the eggs, I really was not convinced, but it really gives the Melanzane that something special so would highly recommend to keep them in!

Wash the aubergines and remove the top and bottom.

Put them in a dish with some salt and then put another dish and some kind of weight on top of them, to press all the water out of the aubergine, and let sit for an hour.

In the meantime finely chop the tomatoes and put them into a pot. Press the garlic, and finely slice 1/3 of the basil into the tomatoes. Let it simmer until it becomes a nice tomato sauce. (You can actually add whatever herbs you want to this dish, in addition to basil I added oregano and thyme).

Dry the aubergine slices with a clean town.

Heat up the frying pan until scorching hot, and fry the slices in batches until they are golden brown. (I just wiped the pan with a little bit of olive oil)

Grease an ovenproof dish. Slice the rest of the basil, the mozzarella and the hardboiled egg in slices. Cover the ovenproof dish with a layer of aubergine slices. Cover the aubergine slices with a thin layer of tomato sauce, a few slices of mozzarella and a few slices of egg, then sprinkle parmesan cheese on top. Repeat the process in the same order but finishing with a layer of tomato sauce. Save about 2tblsp of parmesan cheese to use later.

Put the ovenproof dish in the middle of the oven for about 30 minutes. After the 30 minutes, sprinkle the rest of the parmesan cheese on top of the Malanzane and pop it back in the oven for a further 10 minutes.

This dish tastes much better if it is allowed to rest and cool down for about 20 minutes, as the flavours settle and the cheese and tomato sauce has a chance to thicken. Serve this dish as a side to a nice piece of steak or chicken, or as a main course with a salad – and I guarantee that this will soon become a house hold favourite at your house…that is of course if your boyfriend is not ‘allergic’ to aubergine! ;)