We had been to Tepotzlan a few months prior with some good friends of ours, and I really wanted to return as not only is it a very picturesque little town with cobbled streets, but there is hike up a hill that I wanted to do to go visit an old temple called Tepoztecalt.

Tepotzlan is a really interesting little town steeped in legend and mystery. It is believed to be the birth place of Quetzalcoatl – the feathered serpent god of the Aztecs (one of the most important in their mythology). Today, it is still considered to be a bit of a magical town and is well known for its healing elements, alternative medicines and spas. I would also venture to say there seems to be a bit of black magic that goes on in Tepotzlan, as the two times I have been there I have seen some unusual things – two dead roosters just lying on the pavement next to our car (their throats slit) and then this time, a jaw bone of something on the corner of a road….

Although I do not think it is a ‘known’ destination spot for tourists outside of Mexico, but due to its proximity to the D.F. it seems to be a popular weekend or day trip for both Mexicans and Expats alike. It also seems to be quite the favourite hippie hangout – with a lot of shops selling incense, lava lamps, Indian and Asian inspired clothing and jewellery and lots of Buddhas and Ganesh artwork, which quite frankly irritates me. I am sure neither Buhda nor Ganesh wants to be associated with dreaded, tattooed, ganja smoking hippies who are in desperate need of a haircut and a bath!

Anyway I digress…I can rant for hours on my dislike of gringos who ‘find them selves’ in Asia and all of a sudden only wear Jesus sandals and beads!

SO..apart from the climb to Tepoztecalt, every weekend there seems to be a bit of a folkloric market – selling everything from trinkets, to art, to weaved basket and of course food (no market in Mexico is complete without food!) and is just generally a lovely place to spend a day.

When we arrived to the town, we saw these signs for a Miniature Cockerell Exhibition-which excited the vet in C so we went to have a look. We found the place, payed the entrance fee (all of 5 persos just for men!?) and it felt as though we stumbled into someone’s garden party by accident. Obviously every one there was having a good time, and apart from the rows of cages with very cool looking roosters, there really wasn’t that much more to see – so we had a taco and continued on with our little expedition.

As mentioned previously, my main aim for the day was to climb up to Tepoztecalt – not so much because I have a burning desire for ancient Aztec ruins, but more for the fact that its a great way of getting a bit of a workout on the weekend and being outside (running in the gym 4 days a week does get a bit boring!). So I was rearing to go!

What I didn’t realise however, is the minute you start, it pretty much is a vertical climb up to the top, with steep staircases embedded into the rock face, or rocks and roots that have been carved into foot holds by the hundreds of people who seem to clamber up this hill over the weekend. For the first 40 minutes I had a pretty aggressive pace going on, overtaking groups of people who just seemed to be idling – but about ¾ of the way up, I have to admit I had seriously misjudged how difficult this hike was going to be. 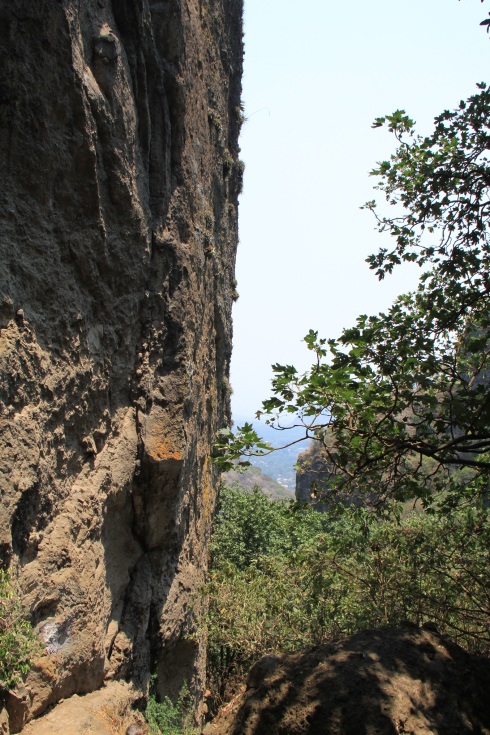 This is not a hill…it’s a bloody mountain!

After about an hour and half we finally reached the top, which definitely gave you a sense of accomplishment. Although the temple itself was not much to see the views over the town and the surrounding area were spectacular! Another amazing scene were the people who made it to the top with us, women in flip flops and tight jeans, or old overweight couples who looked like they were about to have a heart attack – I really had to admire their determination (and kind of question my own fitness level!). 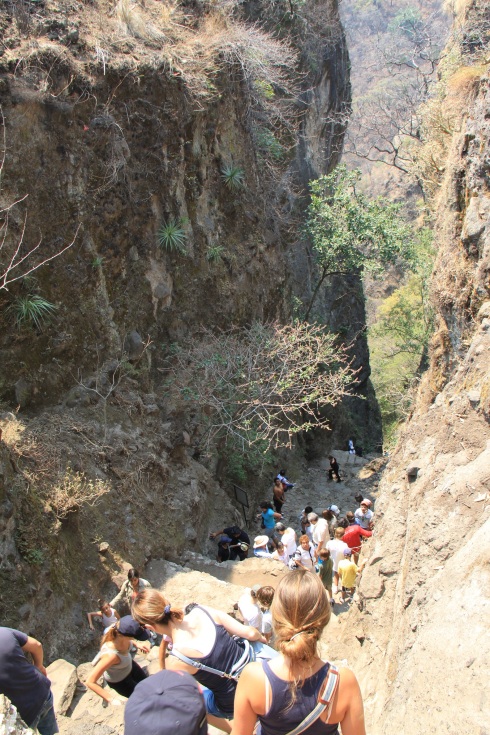 The worst part of being that far up, is the realisation that you have to now make your way down – which was incredibly hard on the legs and knees! But the promise of lunch was my carrot and we meandered our way slowly back towards town and finally made it to the bottom with jelly like legs and a desperate desire for a drink!

But we did come across this beautiful guy on the way down – which was a welcome distraction and a good excuse just to sit for a while staring at the ground.

Initially we had intended to eat at this restaurant – doesn’t it look so inviting? But with a 30 minute waiting list, none of us thought we can make it, and went a few doors down to a far dingier looking restaurant – but they served chicken enchiladas with salsa verde, so I was sold!

It was a pretty hard climb but I am glad we did it and would recommend it to anyone who is looking for a trip outside of the city. What I think would have been even better, is if you intend to make it a weekend trip – spend the saturday climbing up the mountain and then go for a deep tissue message on the Sunday…my legs felt like they were physically bruised for a few days after. 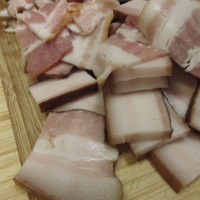